Light, yet filling, Peter Pan donuts (doughnuts?) are the best I’ve ever had, which doesn’t say much. Born and bred on Dunkin’ Donuts, my palette is unseasoned at best. My dining partner just asked me if I like Krispy Kreme; I cringed. They’re too fatty–nothing like Peter Pan’s. Its small, unassuming shop in Greenpoint has a fast pace. Next time, I’d like to sit down and have a buttered roll and coffee–early, to beat the dirty hipster crowd that populates Peter Pan’s counter late on Sunday mornings. 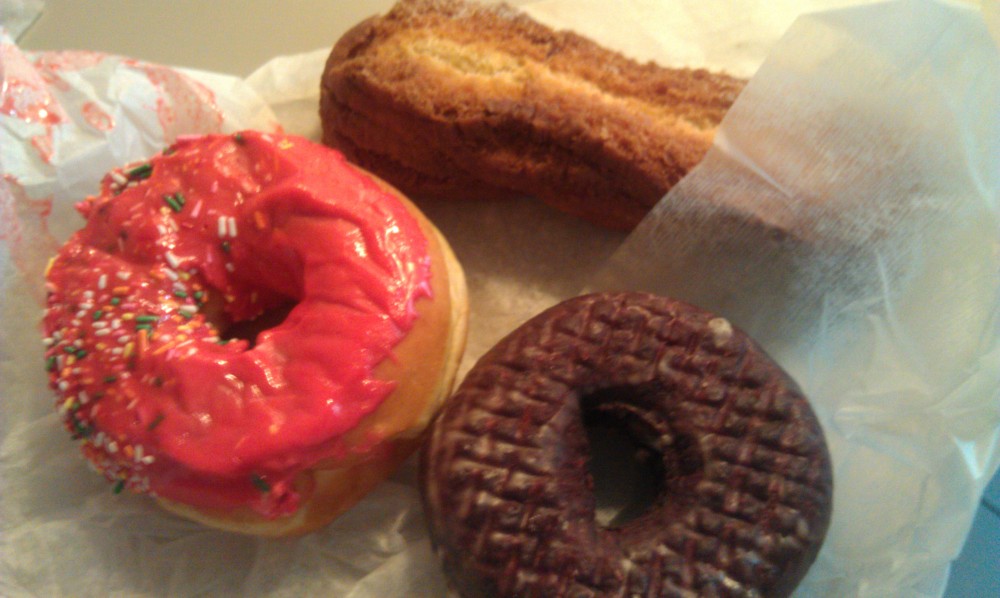 They look good, don’t they. Believe me, they tasted much better than they look. Of the above three, I think the red velvet was my fave. 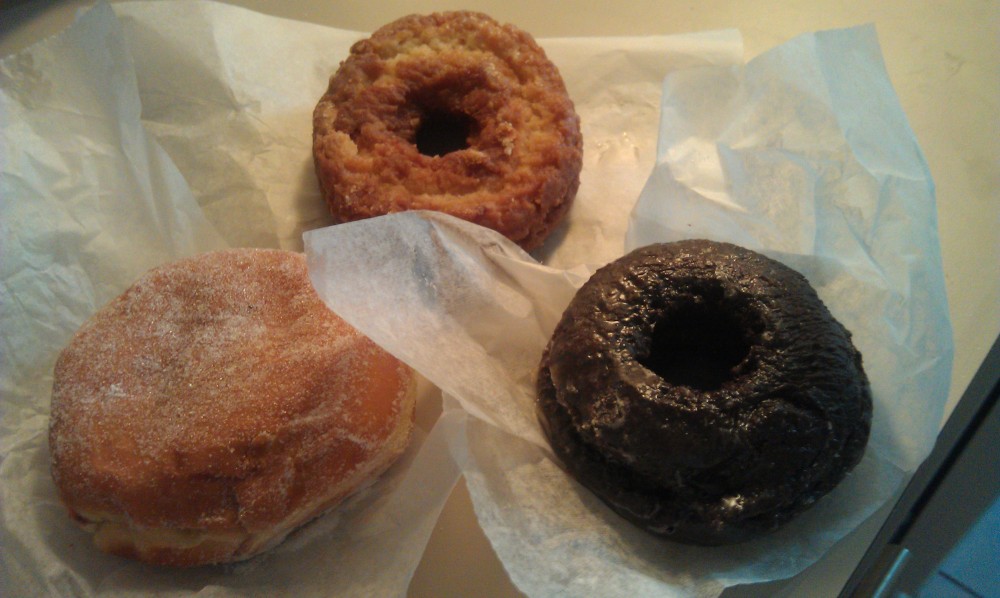 I think the chocolate cake was my overall favorite.

You should try Peter Pan doughnut some time. I’ll be certain to get the honey dip next time around.

When I read about Wafa’s in New York, I knew I had to go there. I trust New York‘s food reviews more than any other in the entire world–much more than Yelp’s attention-deprived diatribes and certainly more than any place Time Out New York might recommend. You see, both Yelp and Time Out are largely indiscriminate. New York (Adam Platt, Robin Raisfield, and Rob Patronite, to be exact) clearly has taste, which is why I rely on it for restaurant recommendations.

Wafa’s, dishing Mediterranean and Lebanese cuisine, is a small place on Metropolitan Avenue in Forest Hills, Queens. Humble and unassuming, the flavor is big at Wafa’s. BYOB is its policy, but luckily there’s a liquor store directly next door.

We started with some grape leaves and babaganoush. Stuffed with rice, onion, parsley, and tomatoes, the grape leaves were average in taste. They lacked something–flavor might be it–but were served in generous proportions. They gave us at least six grape leaves for our order. Though they paled in comparison to the babaganoush, we devoured them. 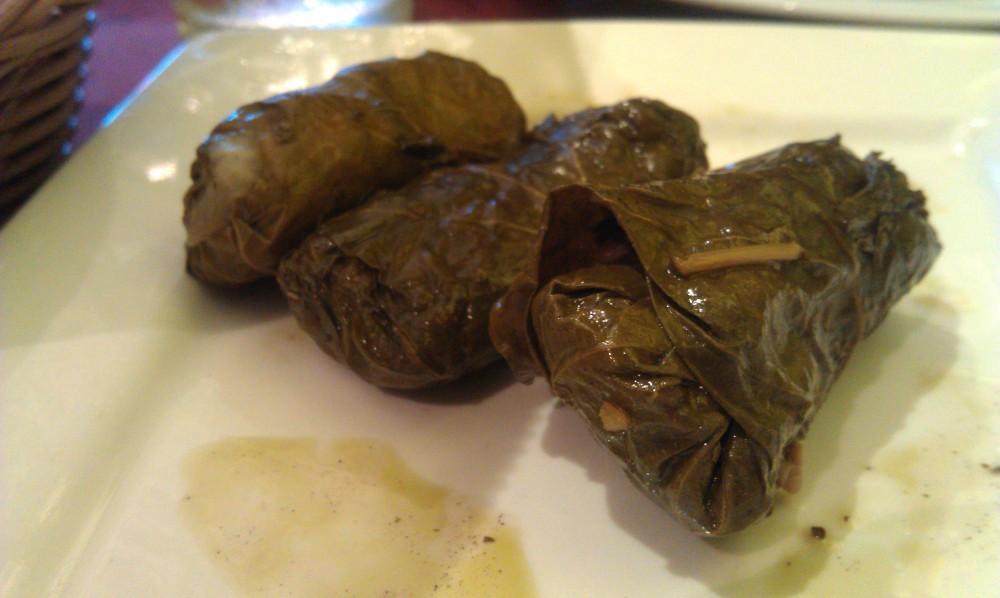 The babaganoush stole the show, however. Prepared with grilled eggplant, the babaganoush had a rich, smokey flavor. Small chunks of eggplant dotted this otherwise very creamy dip. Moustache is one of my favorite Middle Eastern restaurants, but I am certain that Wafa’s babaganoush gives it a run for its money. 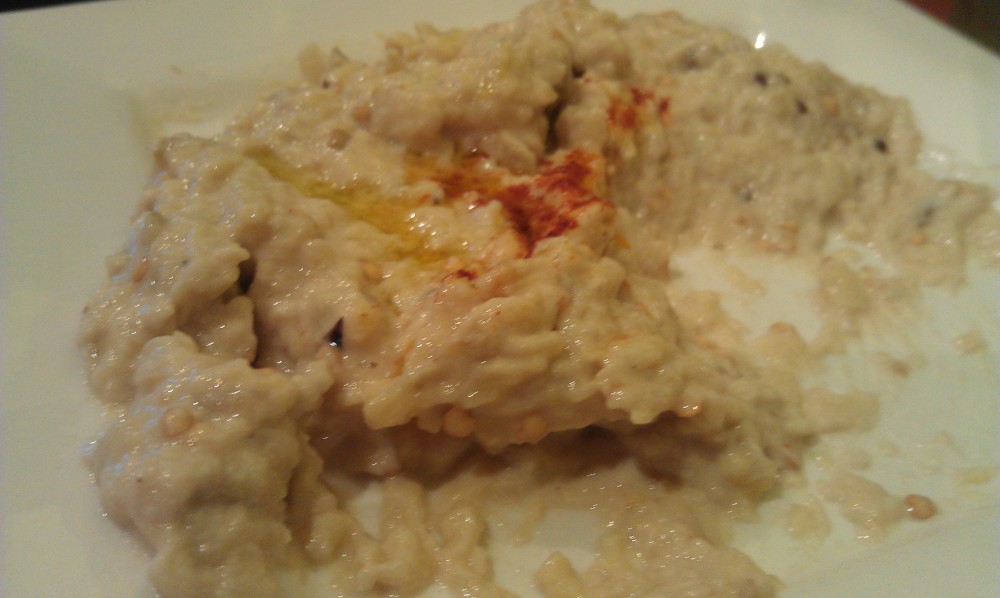 As an entree, I ordered the Lamb Shawerma sandwich, which was chock full of tangy lamb, turnips, onion, lettuce, tomato, and tzatziki sauce stuffed into a light pita bread. It was pretty delicious, but I still think that babaganoush was better. 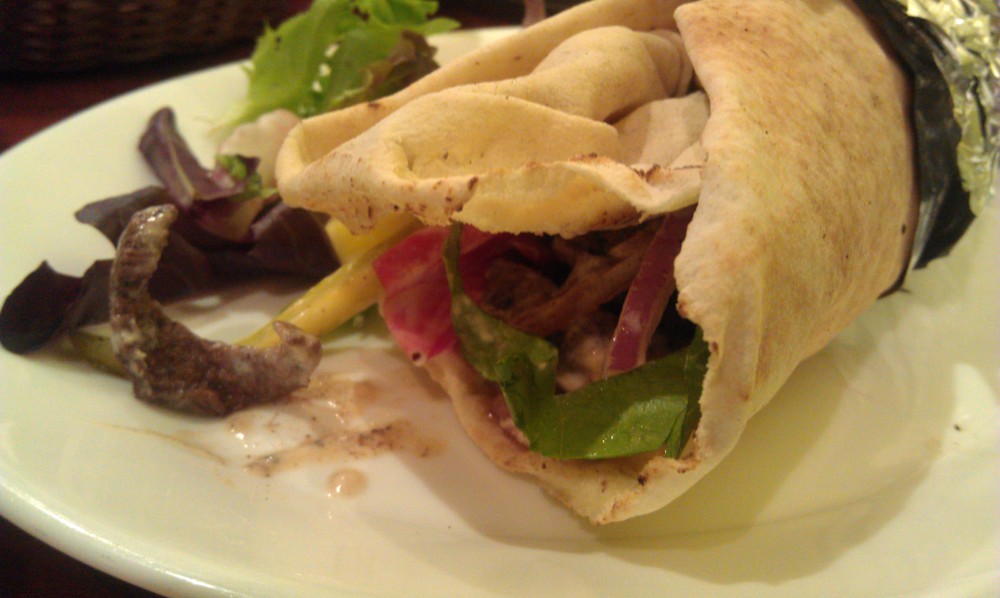 My dining partner ordered the vegetarian platter with fried cauliflower, hummus, and falafel. He’s a big fan of falafel and decidedly enjoyed Wafa’s nicely spiced rendition. The fried cauliflower was delectable, and hardly smelled or tasted pungent (as cauliflower many a time does). Wafa’s hummus is mild: light on the tahini, tasting of chickpeas and lemon juice. He couldn’t believe how full he felt after dinner. “Chickpeas are filling,” I reminded him. (I learned this from the menu at the Hummus Place.) 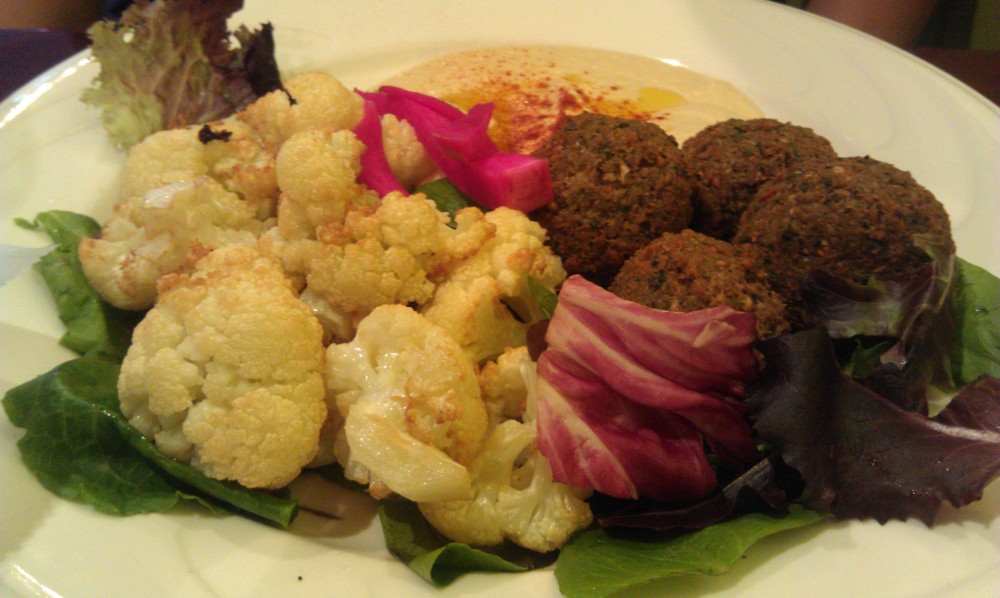 Last but certainly not least, we sampled the baklava for dessert. When I say this is one of the best desserts I’ve ever had, I mean it. The crisp filo dough was layered with walnut/pistachio filling (I thought it was walnuts, but MDP suggested pistachios). Lightly drizzled honey covered the top layer. It was to-die-for–and nearly impossible to eat with a fork. We both ended up eating the baklava with our hands. 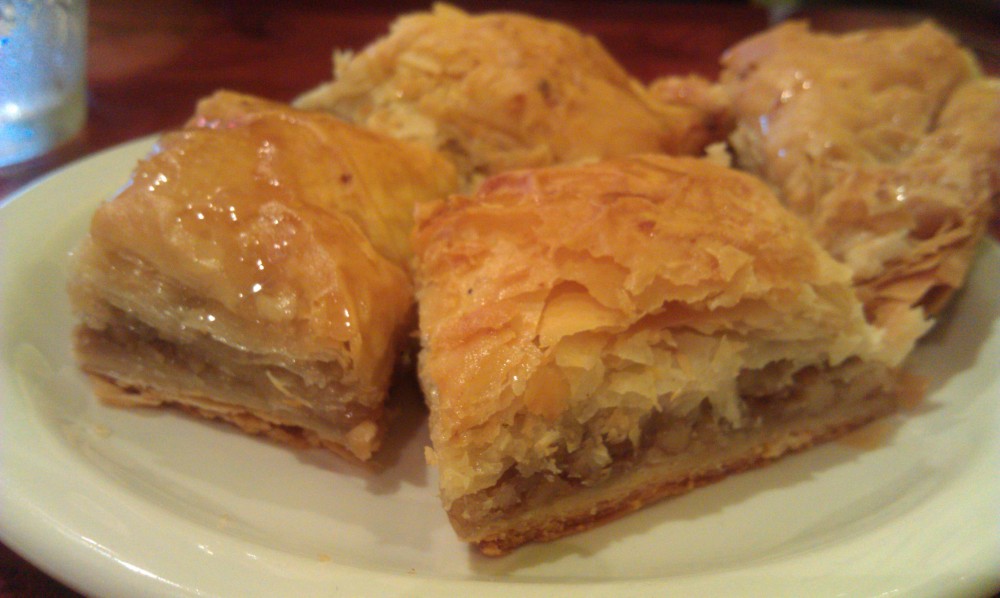 You don’t need to take my advice about anything I write here on this blog. However. I implore you: ORDER THE BABAGANOUSH AND BAKLAVA. You won’t be sorry. One day later, I’m still lost in a Middle Eastern/Mediterranean reverie that is Wafa’s. Try it out some time.

I had heard good things about Smashburger. Some say its burgers rival those of the Shake Shack. Naturally, I was intrigued. Now that I’ve tried it, “overly hyped” and “why isn’t my cheese melted” are the only phrases that come to mind.

The ordering experience is slightly disorienting at Smashburger. You are directed to take a menu and decide what you want. Chicken is on one side; burgers on the other. I’m not sure why chicken gets so much real estate at a place called Smashburger, but that’s just me.

My burger was just okay. The egg bun looked different than I thought it would and the burger was much larger than I had expected (they’re 1/3 pound patties, but you can also order a 1/2 pounder). It was dripping with a certain special smash sauce which tasted like relish. The burger was unwieldy–too many toppings, too big of a patty and too massive a bun. And my biggest gripe of all — the cheese wasn’t melted. I hate when burger places do this, as though they’re too busy to melt the cheese for you. What’s up with that? 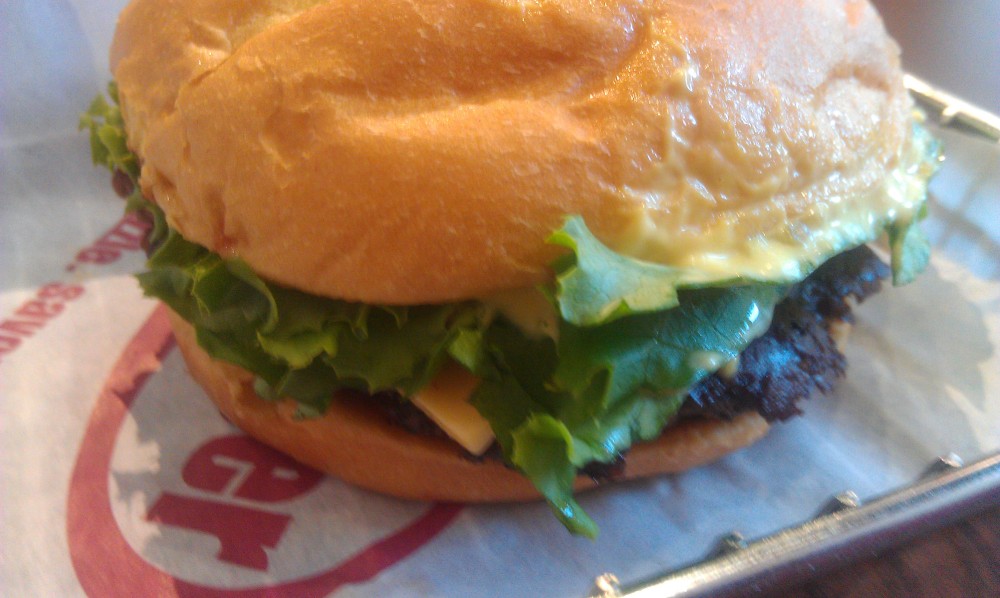 My partner’s burger, also unwieldy, was fine, but I wouldn’t order that if I visited again. In fact, I won’t visit again so I guess ordering decisions won’t be much of a problem in my life.

I ordered the Smashfries on the side of my burger. They’re tossed in rosemary, olive oil and garlic and are pretty decent as far as fries go. However, I’m not a fries person, so don’t trust my word. 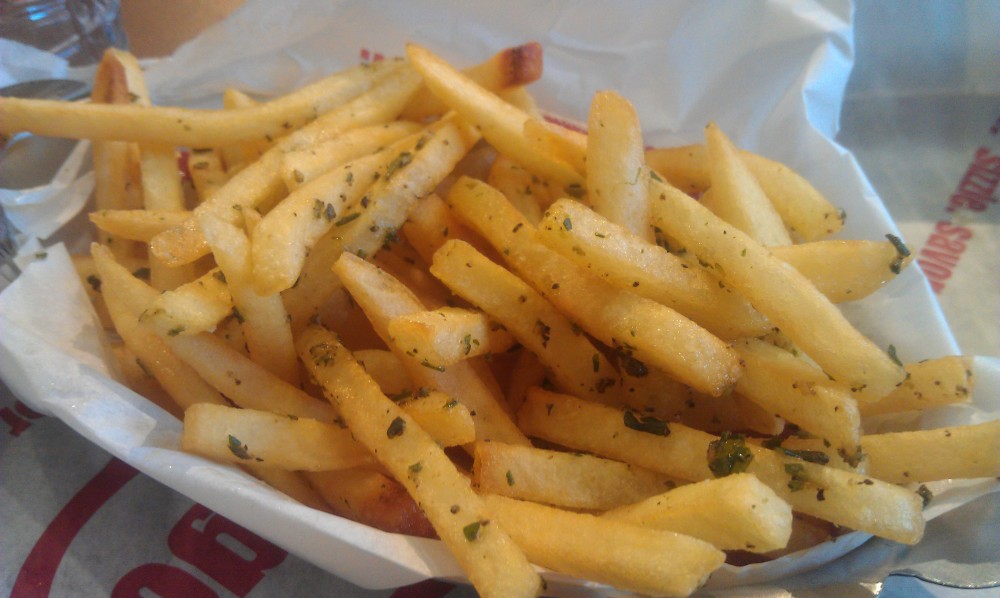 Overall, I wouldn’t recommend Smashburger unless, of course, you live near DeKalb Avenue in Brooklyn. For Manhattanites, it certainly isn’t worth the trek.

Nodus is poised to revolutionize the Thai noodle experience–or so we’re led to believe. In the Sunnyside Post, the owner of Nodus explains that his restaurant offers a glimpse into Thai food beyond Pad Thai. “We want to focus on Thai noodles both broth and without broth,” he said. A novel approach…

Nodus, which is the Latin root for noodle, is squeezed between two forgettable stores and seats about 40 people. Its dark interior sets a certain mood that may impress some, but its food falls slightly short of expectations.

I ordered the Drunken Mama (charming name, for sure), which is a house take on Drunken Noodles with Asian angel hair (?) instead of the usual flat, wide noodles. I wish I had known about the angel hair; I would have stuck with the original Drunken Noodles, which happens to be my favorite Thai noodle dish. 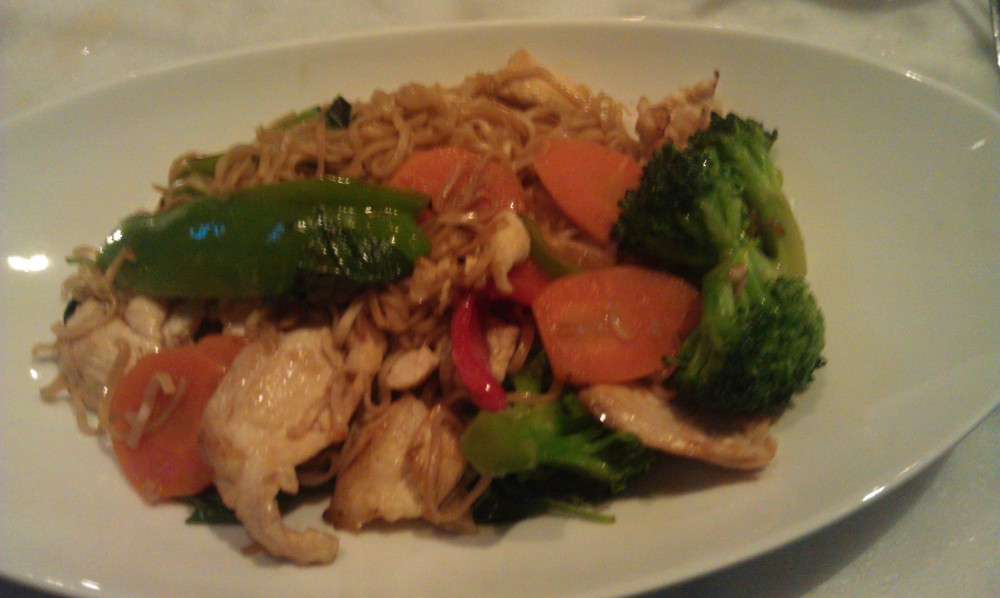 As you can see, the portion size isn’t generous. What you can’t see is that the noodles were too salty. I don’t want to judge Nodus harshly–they’ve only been open for three days. But! There’s definitely room for improvement here.

My dining partner ordered a big bowl of noodles with duck. His portion size seemed satisfactory and his food was delicious. I highly recommend the duck, but I’m not sold on the broth. (You can order the dish dry.) 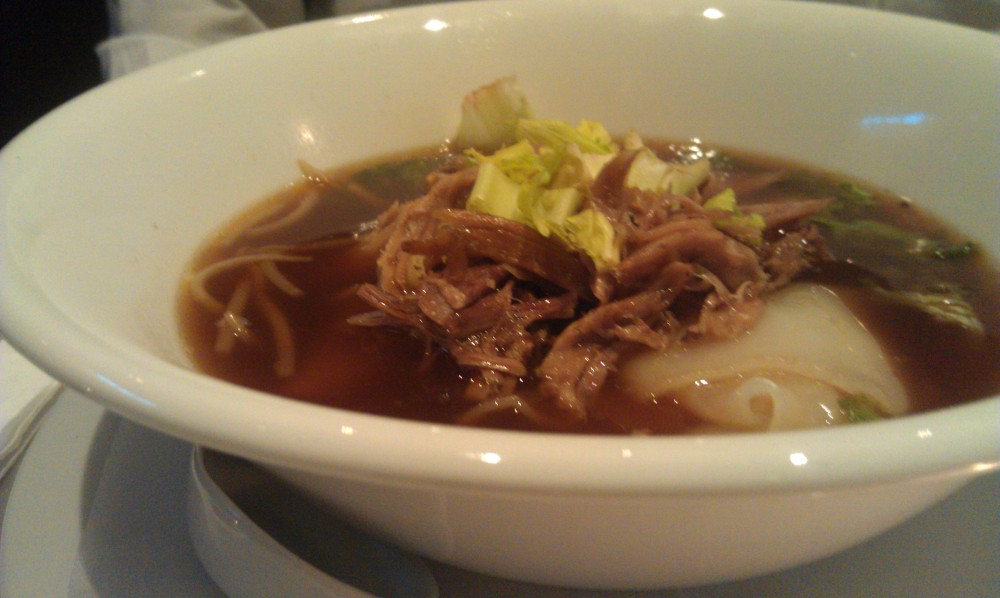 For dessert, we ordered the mango mousse cake, which was the only available option. It was light and airy, and quite delectable. I also had a Thai iced tea, made perfectly.

I might try Nodus again. Maybe I should stick with the standard Drunken Noodles dish I’m often inclined to order. Maybe they’ll offer larger portions down the road. I wouldn’t rule this place out, but, at the same time, it’s not as if Sunnyside needs another Thai restaurant. (We have Dee, Yum Yum, I Am Thai, Thai Malay, and Sripraphai in Woodside.)

Where are my hamburgers? Where are my cupcakes? I patiently await their arrival. Unlike Nodus, I believe hamburgers and cupcakes could truly spice up this neighborhood.

This weekend, my dining partner and I were searching for a good brunch place where we could fill our bellies on Sunday morning. We came across Queens Comfort in Astoria on Yelp, which received fairly high reviews (not that this means anything; it means nothing, really). I’m not a huge fan of Astoria, but I thought we’d give it a go anyway.

We arrived at 10 AM because both Yelp and Google stated this to be the opening hour. In fact, Queens Comfort opens at 11 AM. We killed time at a local bakery, tasting pine nut cookies and pear marzipan.

Once we sat down in Queens Comfort, we ordered hush puppies with housemade ranch dressing. The ranch didn’t have the sharp tang that so many ranch dressings have. Rather, it was light and deliciously seasoned with black pepper. The hush puppies, made of corn meal and spices, were small, but solid in flavor. 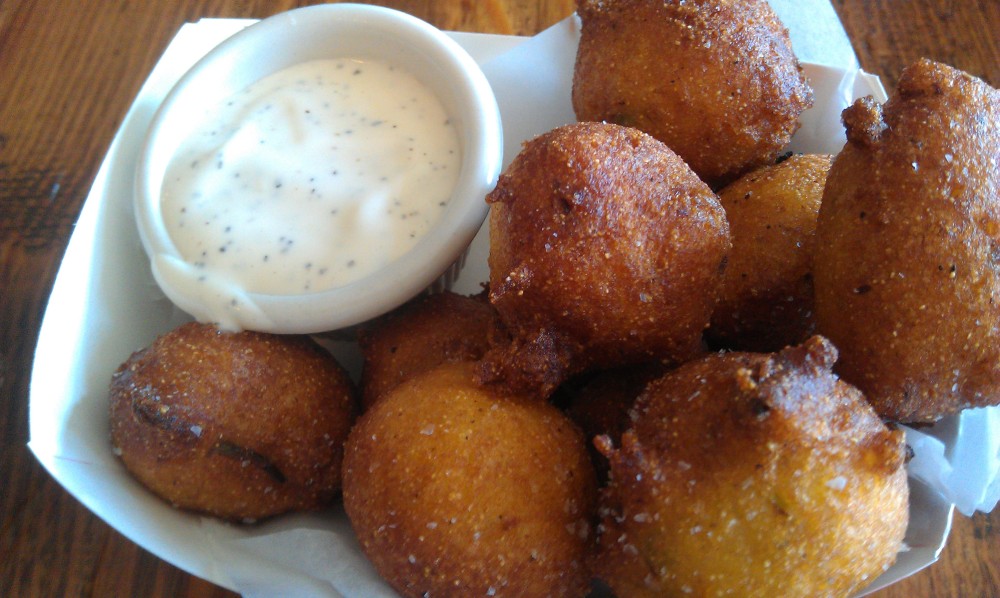 For entrees, MDP ordered pork and grits, and I ordered a fried green tomatoes sandwich. The pork and grits was fantastic. I liked this better than my sandwich, which came with overcooked french fries. The pork was crispy and the grits were creamy. A moat of barbecue sauce lined the periphery of the plate. Yum! 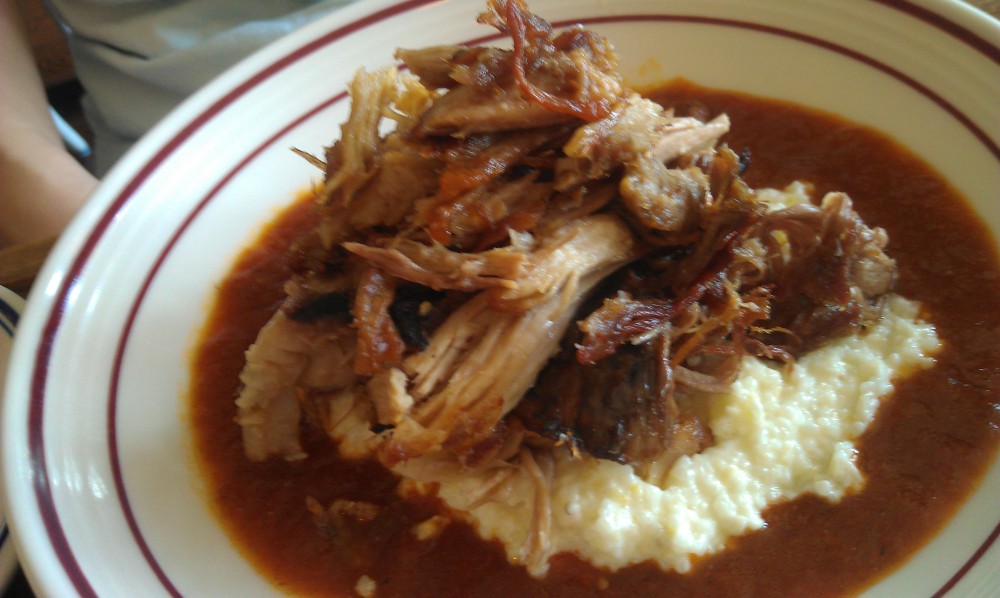 The fried green tomato sandwich had three slices of tomato on it with “chow chow” (corn drenched in tangy sauce) on top. It was assembled on a Martin’s potato bun. I thought it was good, but it lacked the crispness I imagined the fried green tomatoes would have. 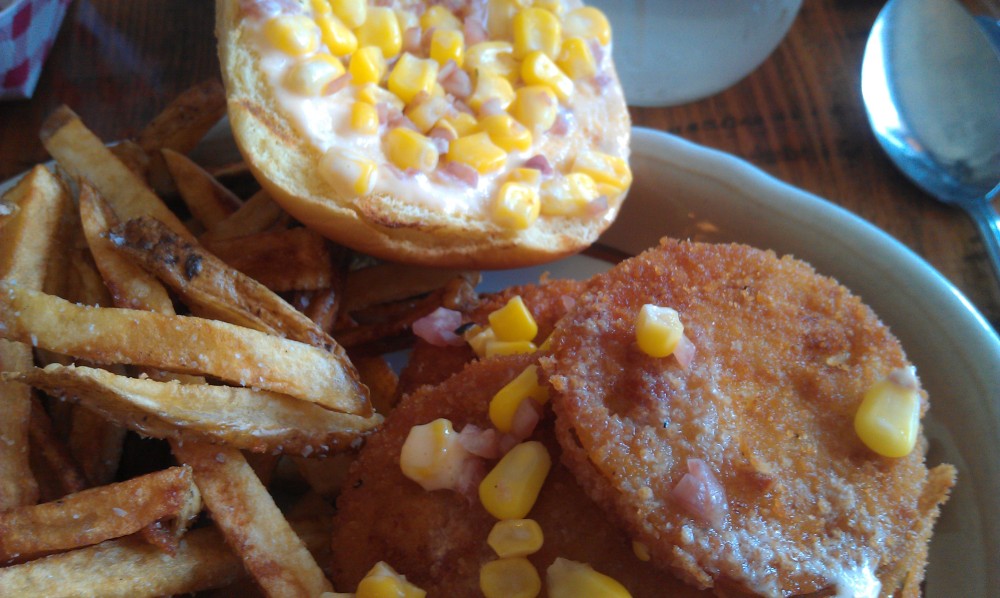 Last–because we hadn’t eaten enough–we ordered a Funfetti housemade doughnut. It was sugary and tasting of fried. We didn’t finish it, feeling fatty enough. 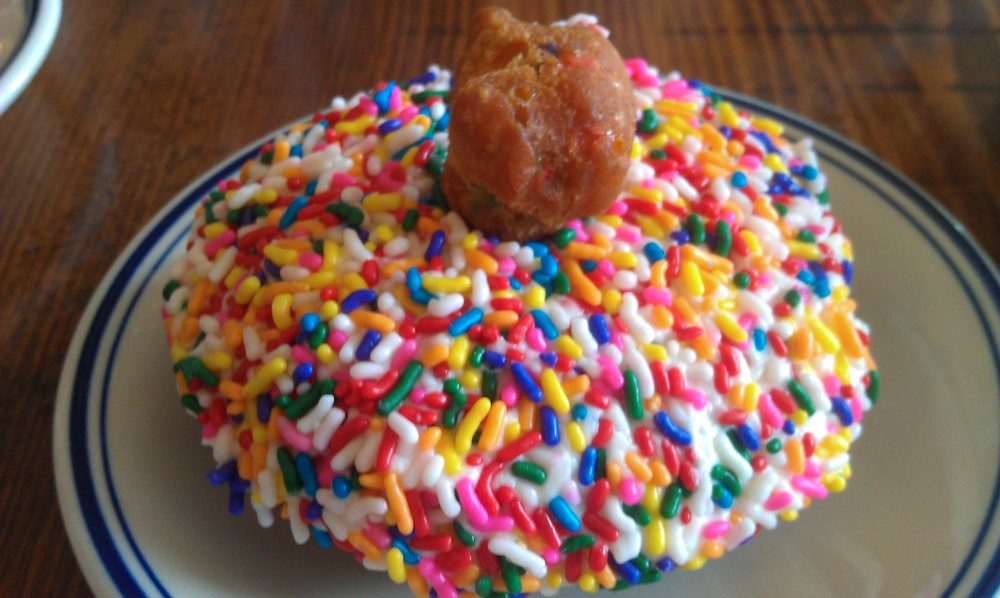 Queens Comfort was pretty good, but Lowcountry (review here) is much better. We calculated that it would take only a few minutes longer to get to Lowcountry from our residence, which means that when we’re craving comfort food, we’re likely to go there.