I came across this new podcast about food and words called alphabet soup. You might check it out! In episode 1, Autumn interviews Kate Payne, author of The Hip Girl’s Guide to Homemaking. They talk about farmer’s markets, concord grapes, and their favorite poets. Pretty interesting!

And I was right, sorta.

Don’t get your hopes up. The burger that was served to me looked nothing like the picture of a cheeseburger on their website. Instead of an artisanal roll, as depicted, the burger came with a standard squishy white bun, which was fine…but false advertising. Also, the fries are presented in a large basket, as was the burger, instead of a trendy tin. I’m not sure who they’re paying for stock imagery. Anyway.

I ordered my burger with cheddar and avocado, one of my favorite toppings. The avocado was fresh and just ripe enough. Though the burger was on the greasy side, I still enjoyed it.

The fries weren’t exceptional, but many in number and tasted fine. My dining partner ordered onion rings, which were slight, crisp strings and delicious (much better than the fries).

burger and cupcakes’ decor is odd. As New York wrote, it’s straight outta Dunkin’ Donuts land with its pink and orange hues. Cramped chairs and tables litter the floor. There doesn’t appear to be any waitstaff, so you might be inclined to order at the front and wait for your food at your tiny table. But you’d be wrong. There is one waiter who tends to 15+ tables in the joint. Odd. Mitchel London is a well-known catering company. You’d think they could afford to hire another waiter.

Overall, the food was fine, but not worth going out of the way for. We happened to be in the neighborhood en route the 34th Street AMC theater, so it was local enough.

After eating adequate Tex-Mex in San Diego, I was interested to revisit New York’s rendition. On our way to see Melissa Ferrick at the Bell House, my dining partner and I stopped at Rachel’s Taqueria in Park Slope. Its over-the-top Mexican kitsch decor turned me off at first, but the food proved to impress. 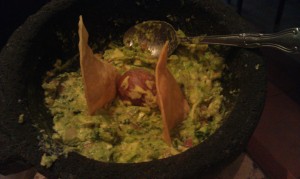 We started with the fresh-made guacamole. A guacamole man rolled a cart to our table and proceeded to unwrap two avocados, sprinkle some cilantro and onions into the mortar, and smash away using two spoons. At the end, the guacamole man placed one of the avocado pits on top of the guac and inserted two chips, which were, by far, the highlight of the meal. The homemade chips are thick, substantial. We went through two baskets of them. As for the guacamole, it was well-seasoned and dotted with small chunks of avocado–just the consistency I like. When we were in San Diego, we ordered guacamole and chips from El Zarape. They gave us guacamole that was near-liquid. Gross.

My dining partner and I both ordered burritos. Mine was the Baja, which is a smaller version of the giant California burrito they offer. It contained shredded chicken and spinach, sour cream, guacamole, lettuce, and cheese. It was great, but I could only eat half of it. I can’t imagine what a feat it would be to finish the California burrito.

My dining partner’s burrito was called El Cholo, a special, featuring carnitas, green tomatillo sauce, and cheese on top with a scallion for decoration. He ate the entire thing, so I’m thinking it was pretty delicious.

We didn’t order dessert at Rachel’s, though they do offer it. In addition to our meals, we drank pink lemonade margaritas on the rock, which were only $4.50 apiece. (It was too sweet for me, but MDP enjoyed his.) Overall, Rachel’s delighted our palettes in a way that San Diego’s Tex-Mex (that we tried) never could.

Here’s a video of Melissa Ferrick playing “Freedom”, one of my favorite songs:

Recently, I went to San Diego with my dining partner. We toured all the sites to see: San Diego Zoo, Gaslamp Quarter, Wild Animal Safari, In N Out Burger. You get the idea. It was a great trip, but I wasn’t overly impressed by the food out west.

This is what we ate:

Banana ice cream sundae from Ghirardelli Ice Cream Shop in the Gaslamp Quarter. It was perfect.

Kobe beef burrito from Ortega’s. It was okay. I thought I’d be blown away by the Tex-Mex in San Diego, but it was subpar overall.

This dish was from Whisk n Ladle, a restaurant in La Jolla. I don’t remember what this was called (cavatelli with something?), but it was delicious. 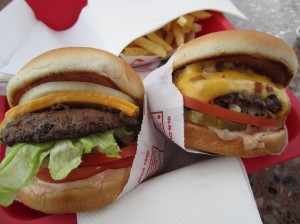 Any trip to California would not be complete without a visit to In N Out Burger. I had my burger Animal Style, which comes with grilled onions, pickles, and the special In N Out sauce. It was, in a word, fantastic. For me, In N Out comes second to Shake Shack. Too bad we’ll never see an In N Out on the East coast.

This was a lobster burrito from El Zarape. I had high hopes for this burrito, but was sorely disappointed. It tasted fishy, not sweet and light as lobster should taste. El Zarape receives rave reviews on Yelp. I can only surmise that its clientele is comprised of indiscriminate college students who are eating on a budget. (Judging from my fellow diners, I think I’m right.) 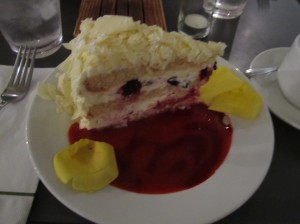 The Ivoire cake from Extraordinary Desserts. The establishment’s minimalist interior and gleaming dessert case felt like something directly transplanted from New York. 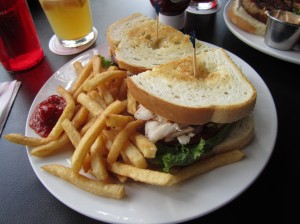 Here is the BLT from the Coronado Brewing Company. Like most sandwiches in California, this one contained avocado. No complaints here.

We tried ice cream from Moo Time Creamery in Coronado. The banana and pomegranate chip ice creams were creamy and flavorful.

Here is a plate where there was once grilled chicken tacos from Mama Testa Taqueria in the Hillcrest neighborhood. I think the guidebook I used recommended this place. The tacos were just okay, which is basically my sentiment regarding all of the food in San Diego.

If you’re going to San Diego, don’t expect to be wowed by its cuisine. I was surprised by how average the food tasted. I supposed I have a New York-seasoned palette, and shouldn’t be surprised by my reaction.

I’ll leave you with a video I took at the San Diego Zoo: