I’ll admit it: I’ve never been to P.J. Clarke’s. Everyone raves over their hamburger, but I have an inkling that it isn’t really that good. To me, P.J. Clarke’s is in the same camp with Donovan’s, which, in my estimation, never served a decent burger in its existence, yet had “Voted Best Hamburger in New York City” emblazoned on its facade. We all have our opinions.

Yet, when I heard Clarke’s Standards were popping up all around the city, I knew I had to try one. So, I picked the Clarke’s Standard most convenient to me (the one in Flatiron/Union Square) and gave it a go. I wasn’t disappointed.

The interior of Clarke’s Standard is cool, clean and comforting. Black-and-white photos of butchers of yore are plastered onto the walls. Friendly employees greet you and comment on your choices (“The Cadillac is the best burger on the menu,” one told me, when I whispered my selection to MDP). Clarke’s Standard is definitely an upgrade from the goodburger outpost that once stood in its place.

Now, the food. Clarke’s Standard boasts interesting offerings in the burger department. The Standard is, as you may be able to tell, a standard cheeseburger. Then, there’s the Cadillac that comes with white cheddar, smoked bacon, lettuce, tomato and their special sauce, which is something like Shack sauce, but not quite as thick. They also offer a Brooklyn Au Poivre edition of the burger, accompanied by cracked pepper sauce, gouda, and a few other toppings. There are several additional burgers on the menu, but these mentioned stood out to me as being the ones I’d like to try. 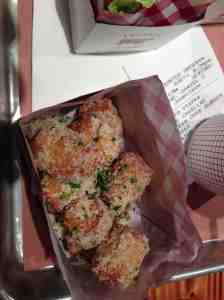 And I was certainly impressed by the Cadillac. The ground angus beef was obviously fresh and extremely flavorful. Though my burger came out looking a bit disorganized, the delicious bacon and cheese added a hearty touch to the sandwich. I enjoyed the sauce, but felt there could have been more ladled on. MDP opted for the green chiles cheeseburger, which has American cheese, charred green chiles, garlic aioli, and mustard on top. I felt the chiles were apparent and bursting with flavor, but MDP did not see it this way. He experienced the heat of the peppers, but not the flavor–interesting dissonance.

We had to order the cheesy tater tots just because they sounded marvelous, as well as the natural cut fries. But the tots came out rolled in parmesan cheese, as opposed to having melted cheese dripping all over them. This was a minor disappointment. However, the tots were still pretty good–potatoy and crisp. The fries were definitely delicious. I might like these fries better than the Shake Shack’s fresh cut fries. “Might” is an underestimation–I definitely like Clarke’s Standard’s fries better. Unlike the Shack’s, which are flaccid and lacking flavor, Clarke’s Standard fries are medium-cut, rigid (in a good way), and chocked full of potato goodness.

All in all, Clarke’s Standard is pretty good. I’ve read some terrible reviews of it on Yelp, but this doesn’t surprise me. Just an aside: People don’t know what they want, unless it’s to complain, which is all they ever want to do on the Internet–and that’s about all Yelp is good for.

“My name’s Stuart Ransom Miller. I’m a serial lady killer,” sang Rhett Miller last night at City Winery–a cool, sophisticated venue–with the whole of his audience acting as an enthusiastic back up singer. If the crowd seemed older, well, there’s no hiding that Rhett Miller has gotten older, too—and wiser, and better looking, if that was even possible. In fact, Rhett’s handsome looks come across more acutely in person than in these photos (thank me later).

The front man of the sometimes called “rockabilly” Old 97’s, Rhett wore a white shirt with fine detailing and tight black jeans over his long, lanky legs that he likes to shake around during his performances. He waves his hips around so much, he actually creates a certain rhythm with his gyrations to complement his expert guitar playing. He swings his right arm like a helicopter blade over his guitar and play-play-play-plays the chords. And he bangs his head during instrumental solos, exuding a “lost in the music” vibe.

He started the show with a song off his latest album, The Dreamer, called “Lost Without You,” a beautiful melody. He also played a number of Old 97’s favorites, including “Barrier Reef,” “Timebomb,” “Solame,” “Big Brown Eyes,” “Just Like California,” and, of course, “Question,” taking the songs in quick succession, pausing just a moment or two and cutting off applause to get the next tune started. All of his singing showcased the unique timber of his voice, and, on some songs, he even broke out into a little bit of vibrato. I was impressed, to say the least.

As the show went on, Rhett’s once-pristine shirt became increasingly drenched and his hair likely sent drops of sweat into the front row of patrons as he head-banged away. He shared with the crowd that he sometimes—and rather innocently—lifts lines and melodies from unsuspecting (or sometimes suspecting, in the case of Bob Dylan) writers. His song “Champaign, Illinois” features a Bob Dylan melody, and you probably never knew that—well, now you know.

The show was awesome, and the hostess told me that Rhett plays City Winery pretty often. I guess that won’t be happening any time soon as he mentioned that he’s going to Texas in the coming days to work on a new Old 97’s album. I suppose we’ll just have to see him when he returns.