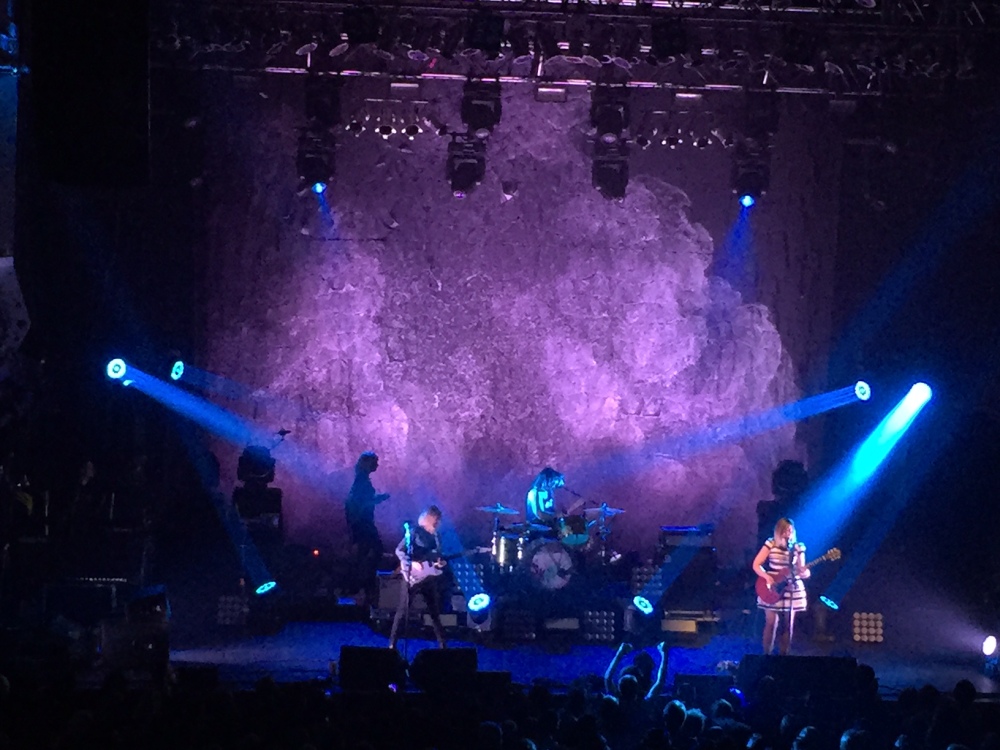 The venue was dark when the band entered from stage right. The energy at Terminal 5 was rising, and I could feel it seeping through the floorboards of the second tier where MDP and I were standing. One spectator commented that more than 1,000 people must have been present for the second night of a sold-out two-night appearance by the band that vanished into thin air eight years ago.

Sleater-Kinney is easily one of my favorite bands. Two guitars and a drum set comprise this trio, which could be one of the more unique aspects of the band if they weren’t also so exceptional in so many other ways. I once read that they tune the lower E of their guitars to C sharp, which, as a burgeoning guitar player, simply blows my mind. Don’t the chords sound different? I wondered, trying to comprehend how it must be writing with such a different sound.

Their feminist roots in the riot grrrl movement of the ’90s runs through their tunes, but their lyrics are much more sophisticated and thinkworthy than your run-of-the-mill Bikini Kill. And, of course, this is not an insult to BK as much as it’s a compliment to SK.

Last night, on February 27, the band took the stage and played through their catalog, album by album, speeding up certain songs and adding flourishes here and there in time-honored Sleater-Kinney standards, such as “Words + Guitar” and “One Beat,” a song that contains some of my favorite lyrics EVER:

Should I come outside and run your cars?
Should I run your rockets to the stars?
Could you invent a world for me?
I need to hear a symphony
If I’m to run the future,
You’ve got to let the old world go, oh oh 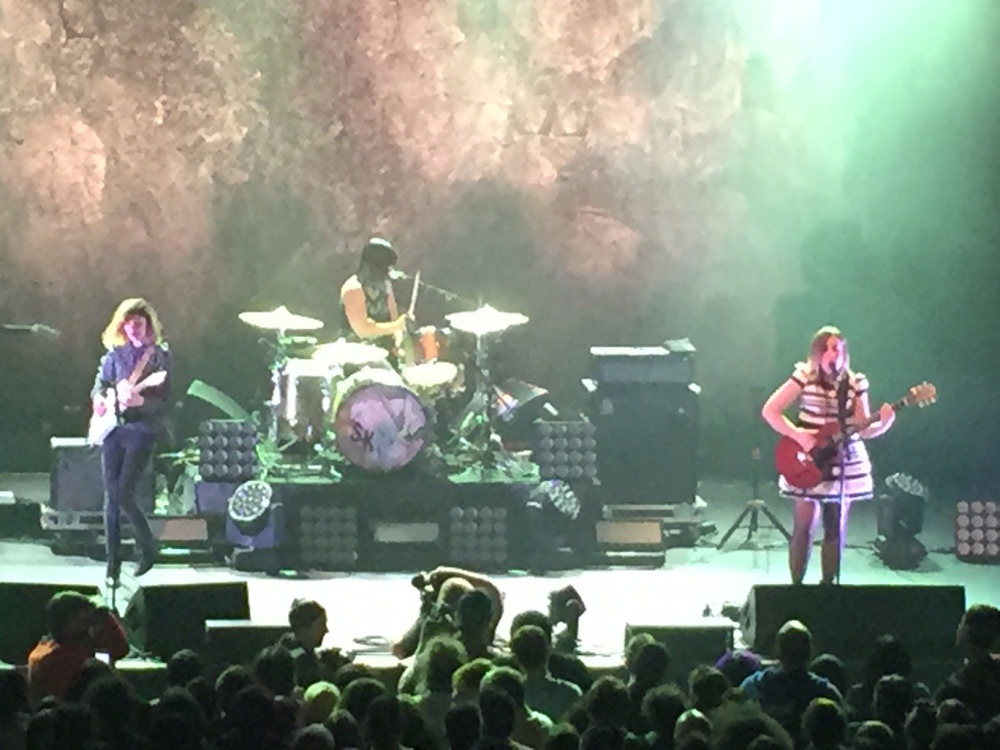 More known for her appearances on Portlandia these days than for her guitar playing, Carrie Brownstein danced across the stage, kicking her long, lanky legs up toward the ceiling as she ripped through lines that only expert guitarists could dream of playing. Corin Tucker belted out number after number with her unique voice, penetrating even the most insulating ear plugs worn by novice SK attendees. And Janet Weiss, on the drums, back up vocals and harmonica, kept the beat plugging along with adroit playing.

The crowd was filled with three types of people, as far as I could tell: the long-suffering Sleater-Kinney fans who have been behind them since their noteworthy album Call the Doctor dropped (I’m in this group); the newbies who know No Cities to Love, their new record, with a sound that demonstrates the nearly 10 years of music that’s occurred since the band last wrote together; and the people who like Portlandia.

Although she’s the most famous band member today, Carrie didn’t ham it up by making funny remarks here and there. She kept it low-key and largely allowed Corin to speak to and rev up the crowd.

Their experience as seasoned musicians shone through on just about every song. Carrie’s masterful guitar lines exploded on songs like “Youth Decay,” which was way more uptempo than the album rendition, and “Dig Me Out” with its clarion call of punk-infused indie rock. Corin’s voice reverberated to the highest tiers of the massive venue, and sounded gorgeous on classic tracks like “Good Things,” a fan favorite.

I was reminded of the brilliance of their songwriting when Carrie began singing “Entertain” off their 2006 album The Woods:

So you wanna be en-en-tertained?
Please look away, don’t look away
We’re not here ’cause we want to entertain
Go away, don’t go away

In this song, Sleater-Kinney cuts right through to the heart of the matter when it comes to fame–could it be about their struggle with becoming a renowned rock band? Or even Carrie’s place on Rolling Stone’s list of “most underrated guitarists of all time”? Could be both these things, but they’re also talking more generally about society on a whole. That’s what I mean about Sleater-Kinney’s sophisticated lyrics–they’re incisive, bold, and brilliant. And don’t even get me started on the aural aesthetic of this song: Carrie’s muted, round articulation of the lyrics paired with Corin’s fiery vocals, and a militant drumbeat banging in the background plus the intricate guitar lines–it’s all spectacular!

The show was one of the best I’ve been to in a long time, but the band only played an hour-long set, which surprised me. I guess the ladies of Sleater-Kinney know how to end on a high note, leaving their fans from all walks of life “always wanting more,” as they sing in “I Wanna Be Yr Joey Ramone.”

So, you thought I only wrote about Taylor Swift and food on this blog. And I understand why you’d get that impression, given the header and the name. But, as stated in Taylor Ham’s tagline, this blog is about all kinds of music.

Below is a taste of what happened at the show. Enjoy!

Xi’an Famous Foods is probably my favorite Chinese restaurant ever. This seems to be the widely held sentiment among New Yorkers (and please God let Xi’an be a secret kept from tourists — for now anyway). At the Xi’an near my workplace, the line is typically out the door and down the block. Sure, it’s a hole-in-the-wall space, but the demand for high-quality Chinese foods has reached a fever pitch since Xi’an came on the scene in full force a few years ago.

There’s a Xi’an in Flushing, and I’ve even gone there with MDP for take-out to bring back to our home 30 minutes away — that’s how good Xi’an is.

But, now I don’t have to travel to Flushing for authentic noodles and dumplings because Dumplings & Things (see menu here) has opened up shop in Sunnyside. Yesterday was the opening day, and I’m fairly certain it will be the first and last time I ever actually eat there. The hungry crowds are coming, and I suspect they’re looking for Xi’an-level deliciousness. They’ll certainly find it at Dumplings & Things.

I wouldn’t call Dumplings & Things a chain, but there’s definitely another outpost in the Park Slope area of Brooklyn, which has garnered rave reviews. It’s no wonder. Dumplings & Things serves up delectable Chinese (and sometimes Korean) fare for affordable prices — think $3.50 for a plate of five dumplings. Yeah, that cheap.

MDP and I were dead-set on sampling a wide variety of Dumpling & Things’ offerings, so we went about scanning the menu and choosing a food from just about every category: dumplings, noodles, baos, rice platters (we’ll try next time), and appetizers. 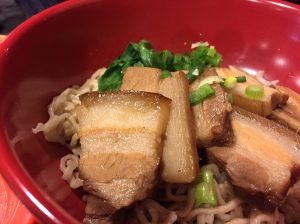 So, let’s start with the dumplings. We opted for the pork and chive (steamed) type. The filling was nearly bursting from the tightly wrapped skins, which goes to show the value you get when you order dumplings from this amazing place. And they weren’t just plump — they were delicious, too. Unlike some pork and chive dumplings that are typically “chive” in name only, these had a distinctly chive flavor that made the entire experience of biting into each dumpling feel fresh and clean.

We had to get noodles, and Dumplings & Things has a nice selection on their menu. You can either get your dish with rice or “regular” noodles (which, I think, are either ramen or la mien), and with broth if you choose. We got the braised beef noodles and melt in your mouth pork belly ones. Wow, both were just out of this world. While Xi’an’s wide hand-pulled noodles are pretty impressive, Dumplings & Things’ noodles are also up there on my list. They, like the dumplings, were bursting with flavor. Our respective meats were beautifully flavored and heaped aplenty on the top of our noodles, which cost a mere $6.50 and came out in a giant traditional bowl.

MDP wanted to try a bao, so he ordered the braised beef one. It’s two baos per order, so I was in luck. I bit into the bao, with sliced cucumber and carrot, as well as crushed peanuts on top, and was blown away. One of the best restaurants in Sunnyside, Salt & Fat, used to serve unique pork belly baos. I think Dumplings & Things is giving them a run for their money in the bao department.

I wanted to try the garlicky cucumber salad, to compare it to Xi’an’s version, so we got that, too. It was good — not great, like Xi’an’s — but MDP figured out that, if we doused the cucumber pieces in soy sauce, the dish would taste better. It did. Somehow the soy sauce brought out the garlic flavor more intensely, and I was a happy clam.

All this food cost about $29. Twenty-nine dollars! The seating arrangement inside is fairly utilitarian, with simple stools and small tables for patrons to dine at. It’s no sit-down and order through a waitress place, either, so snag a table before you put in your order at the counter. Getting your food could take upwards of 20 minutes because I think Dumplings & Things has a few kinks to iron out in the kitchen process yet, so grab a gourmet ginger ale and sit tight.

I highly recommend Dumplings & Things. If you’ve been looking for your local Xi’an, this is it.

Dumplings & Things
45-26 46th Street (between Queens Blvd. and Greenpoint Ave.)
Sunnyside, NY
Take the 7 train to 46th Street. Walk south for one block. It will be on your right.