Situated just off Park on 22nd Street, the tiny Tamarind Tea Room is adjacent to the proper Tamarind restaurant you may have heard so much about. Their Indian fare is legendary, and the Tea Room certainly reflects the level of service and quality consistent with the larger restaurant.

My Lady Dining Partner (MLDP) and I visited Tamarind Tea Room for lunch and ordered off their limited menu of inspired sandwiches, salads and appetizers. They make up for the short entrée list with a lengthy tea inventory and a page and a half devoted to desserts. The physical menu itself is adorable—a small leather binder with the simple Tamarind logo embedded on the cover. You’ll feel at home flipping through the pages, taking in the various delectables the Tea Room has to offer.

For my entrée, I opted for the tikka malai sandwich. Chunks of chicken straight from the tandoor oven filled a delicious wrap, with onion and bell pepper making an appearance. MLDP ordered the spinach kofta sandwich with mint-chutney dressing that looked quite good. On another occasion, I tried the saag paneer sandwich that was extraordinary—giant pieces of paneer cradled in a wrap with fresh leaves of spinach. It was scrumptious. 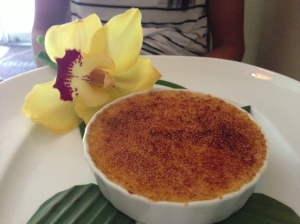 I had tried the mango cheesecake during my first visit to the Tea Room, and declared it one of the best cheesecakes I had ever tried. Well, a visit to Tamarind Tea Room wouldn’t be complete (to my mind) without getting the mango cheesecake again, so that’s what I did. With a creamy, mousse-like texture, the cheesecake sits delicately on a wide plate in two beam-like structures, with dots of caramel as garnish. MLDP wanted crème brulee, so she ordered the lemon and cardamom inflected dish, which had a thin, crisp exterior of burned sugar—delicious! We also ordered coffee, and even that was good.

If you’re in the Flatiron neighborhood, make a point of stopping at Tamarind Tea Room for lunch.  You won’t be sorry.

Sunnyside’s answer to that question is possibly Saffron Garden, a relatively new Indian restaurant on Skillman Avenue, where less-than-spectacular Basmati Table once was. Saffron Garden serves up the typical Indian fare: samosa, mango lassi, tandoori dishes, and so on. But it’s cozy decor and impressive service separate it from the chaff. (It sounds like Sunnyside Food had a different experience when it comes to service.)

Usually, we order take out from Curry Point, an Indian restaurant over on Greenpoint. Curry Point’s food is delicious, cheap, and sets the bar for Sunnyside Indian cuisine.

At Saffron Garden, we started with the vegetable samosa. The exterior of the samosa was light and didn’t taste fried, but baked instead. The innards were a finely, mildly spiced mixture of ground vegetables. The samosa were accompanied by a cold chickpea chutney of sorts, which was good, as well. I think Saffron Garden’s samosa tasted better than those of Curry Point, where the samosa have a lingering fried flavor.

For our entrees, we ordered chana masala and chicken tikka masala (although the menu said “chicken tikka marsala” as though we were in some kind of Indian-Italian fusion restaurant). The portions were just right, though appeared modest by their depth-deceiving serving dishes.

I ordered the chicken tikka masala, a tomato-buttery cream sauce with interspersed chunks of chicken marinated in yogurt and spices. The sauce tasted sweeter than that of Curry Point, and I liked it. The rice that was served with the meals was a blend of rices, rather than straight-up Basmati rice. It was delicious.

My dining partner ordered the chana masala, a chick pea dish with spices. I thought it tasted good–spiced well and dense–but he said he preferred Curry Point’s rendition. Though he was unimpressed by his dish, he praised Saffron Garden’s light and tender naan.

I also ordered a mango lassi, which was served with ice–an atypical feature. It was thick and creamy and delicious.

I recommend Saffron Garden. I hope they are able to stick around the neighborhood.

According to the Sunnyside Post, Anise Fusion is an Indian/Chinese restaurant. I disagree. They have a number of Thai dishes on their menu and only a few hints of Indian (the mango lassi is the biggest giveaway). Regardless of their ethnic origins, their menu has too much going on and not enough flavor.

We decided to order from Anise Fusion as a function of Hurricane Irene. What restaurants would be open during the catastrophic event? We thought we’d try the new place in the face of the end of the world (as reported by the TV meteorologists).

For appetizers, we opted for the lollipop chicken and chive pancake.

We ordered the lollipop chicken because we had been so fond of Tangra’s. There were four pieces, all of which were crisp and light on the meat, as they should be. Both my dining partner and I enjoyed them.  Anise Fusion definitely does the dish justice.

The chive pancake was a disappointment. Dark green and cut up into bite-size pieces, the pancake lacked flavor and was accompanied by a soy-like sauce.  I wouldn’t recommend it. Yum Yum Queens puts out a much better rendition.

My dining partner ordered tofu with cashew nut sauce, a Chinese delicacy. It lacked flavor and punch, though I liked the inclusion of pineapples in the dish.

I got the red curry with chicken, a Thai specialty. I make red curry with tofu at home all the time and it comes out just fine–a thickened sauce with bamboo shoots, peas, and green beans. This is what I expected of Anise Fusion, at the very least. I was sorely disappointed. The red curry sauce was thin and flavorless, and there was an ample presence of bamboo shoots–an almost overwhelming presence–without anything else. I usually like to see some vegetables in my red curry. Anise Fusion didn’t deliver. I wouldn’t recommend ordering red curry from there–again, Yum Yum does a much better job with this dish.

If you’re looking for Indian food, try Saffron Gardens. If you want Thai, try Yum Yum. If you desire fusion, definitely go to Tangra, which is right around the corner from Anise Fusion. You can get take-out from all of these places (I’m almost certain). Don’t waste your time with Anise Fusion. The best part of my meal was the Thai iced tea that I ordered–but, honestly, who can screw that up?

Take the 7 to 40th Street and walk one block east.