This past week, my mom and I visited Fort Lauderdale. We soaked up the sun, took in some sites and ate lots of delicious food. I wanted to share with you my assessment of the food in Fort Lauderdale, so that, when you visit–and I hope you do–you can try some of the places I did on my trip.

But first, a view of the beach. (Ignore the random man in the foreground.) 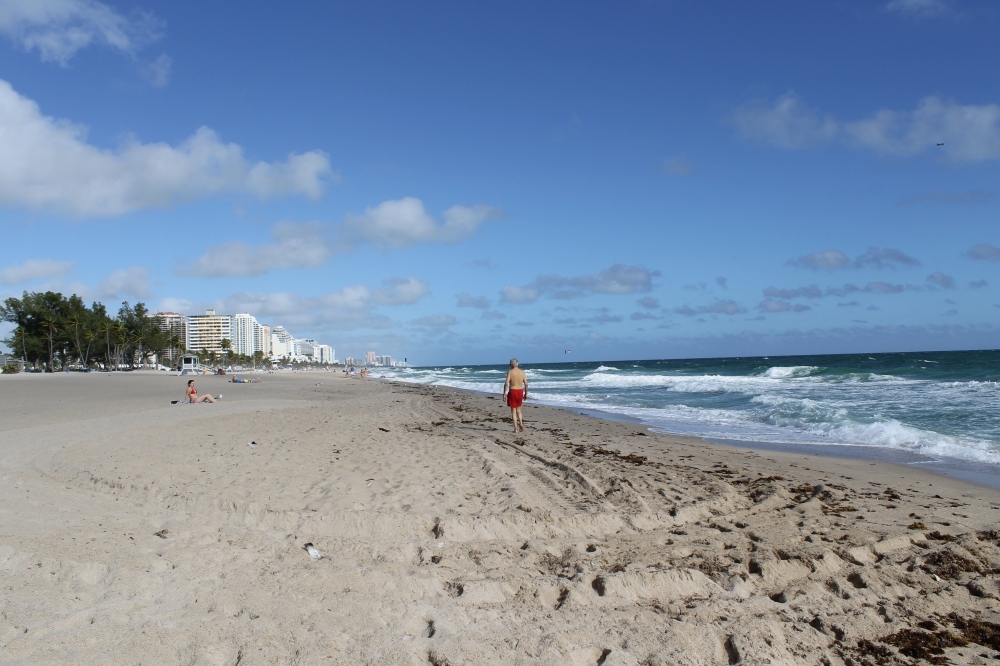 We arrived Wednesday evening and decided to go to Rocco’s Tacos and Tequila Bar down on Las Olas Boulevard. At 6 p.m., the place was already hopping. We parked our car in the valet lot (for a mere $5, which I wasn’t used to, obviously, since I live in New York and parking costs an arm and a leg here), and entered the dimly lit restaurant for some dinner. We opted for the nachos to start, which were outstanding. Thick layers of cheese, ground meat and tortilla chips, and big dollops of sour cream and guacamole filled the plate. Going on the recommendation of the place’s name, I ordered some tacos (chicken and chorizo) and felt less than impressed, but my mom’s burrito was very good. We also tried the tres leches cake for dessert, and this was undoubtedly the highlight of the meal.

The next morning, we woke bright and early and got a head start on the beautiful day. We went to The Original Pancake House, which is none too original considering the roughly 11 other locations that exist across the state. It seemed Florida is big on breakfast, particularly pancakes, so we were in good hands. I ordered the standard buttermilk flapjacks, while my mom got pigs in a blanket. I also tried a side of turkey sausage. All was very good, but the bill came to over $30, probably due to the fresh squeezed orange juice we ordered on a whim at the start of the meal.

pigs in a blanket

We skipped lunch and instead decided to have an early dinner at Le Tub, a remote saloon heralded for their burger. I was skeptical at first. The place has toilets in the front of it. But when we sat down, and a charming fellow dropped our menus on our table, I figured it had to be good. The view was inimitable. We saw the Water Taxi I’ve heard so much about pass us by on the water that Le Tub is built over. For an appetizer, we got the mozzarella sticks, which, as my mother observed, were not frozen-tasting, but rather very fresh and had melty, stringy cheese within. We both opted for the classic 13 oz. Le Tub burger, which was stacked high on a poppy seed bun with onion, lettuce and beautiful tomato fixins on the side. The burger was outstanding! The meat was amazing and the sear was perfect. It was juicy and I couldn’t finish it–but wanted to! We ordered fries, too, and they were pretty good. At the end of the meal, we got some key lime pie–because it’s my favorite and I couldn’t resist being so close to the real key limes to not have it–and it was phenomenal! So creamy, so limey. Le Tub’s key lime pie was my favorite, outpieing both the Rustic Inn and Casablanca Cafe, which I’ll report on later in this post.

For the second morning in a row, we woke early and got on the road to try Mom’s Kitchen, which was located out by the crappiest mall I’ve ever been to. (It was so bad, the nicest store in it was Target.) Mom’s Kitchen is in a strip mall, so I didn’t expect much. And really I didn’t get much in return from Mom’s. I ordered a special that came with biscuits and gravy, eggs, home fries, sausage patties and, for some reason, toast. Not sure why they give patrons toast when they already have biscuits as part of the dish, but I didn’t question it. I even specified rye toast and had it buttered–I’m glad I did since I ended up filling my gut on the toast. The first problem with my dish was the tepid white gravy. It lacked flavor. Next, the biscuits weren’t very good or fresh tasting. Third, the eggs were browned and nearly burnt. Not a fan of Mom’s, I have to say. My mom ordered the steak and eggs, and seemed to enjoy her dish.

During the day, we went to Zoo Miami because it was overcast (it turned out to be beautiful in Miami), but returned to Fort Lauderdale to have dinner at Rustic Inn. Rustic Inn is not fancy, but it’s food is fresh and quite good. Although they are known for their garlic crabs, we opted for different dishes. We got the baked clams for an appetizer, which were good, but didn’t taste like clams to me. My mother observed that the stuffing reminded her of Thanksgiving. For my entree, I ordered the lobster fra diavolo, which was AMAZING! I’ve never had this dish before, so I have nothing to compare it to, but it was incredible. Clams, mussels, shrimp, crab and a whole lobster were placed over a pound of linguine in a delectable white sauce. It was so fantastic, yet so large I couldn’t finish it. Mom ordered the scallops, which seemed to literally melt in my mouth. Very good. I highly recommend the Rustic Inn. We also got the key lime pie, which was good, but didn’t knock my socks off.

The next day, we went to breakfast at Hibiscus Cafe, which is tucked away in a shopping center, and I nearly passed it. We sat outside, taking in the morning air and enjoying the sunshine (the theme of the trip). Mom ordered the migas, which came with fluffy eggs (as advertised), jalapenos, tortilla chips on top and cheese. She also got some spicy home fries. Hers was very good! I got the blue fried egg sammy, which was supposed to be a fried egg with blue cheese and arugula on some divine toast, but I was served an egg cooked over easy (and I don’t like runny eggs). I sucked it up and ate it anyway, but someone should let Hibiscus know that they should stick to the menu plan when making their dishes. Maybe I should have said something, but, as my mom said, I’m not one to send food back. This was the best breakfast of the week, despite my misgivings over the way the egg came out.

On our last night, I knew we had to go somewhere good. Originally, we thought about going to a Greek restaurant, but I found this place, Casablanca Cafe, in my guidebook and decided to give it a whirl. Just across the street from the beach, Casablanca Cafe has a scenic vista, yet is a very windy spot, indeed. We were first sat near the front of the outdoor dining area, but the wind was so extreme, we had to be moved inward toward the restaurant. On the pricey side, Casablanca Cafe is good for a special occasion. We ordered the burrata to start. It was creamy and incredible, yet very small. It was accompanied by some halved cherry tomatoes and arugula. I liked it. For our entrees, we ordered the twin lobster tails and the peppercorn dusted filet mignon, so that we could each have surf and turf for dinner. The lobster was tender and flavorful, but the steak was just average. I wouldn’t recommend getting the filet mignon, because it didn’t taste much like peppercorn (I suppose they could argue that it was “dusted” as opposed to “doused” with the substance). However, the vegetables and cream glaze that came with the steak were both very, very good. We ordered key lime pie for dessert, and this was pretty good, but, as I said earlier, Le Tub takes the cake for best key lime pie tried over our five-day stay.

All in all, the food in Fort Lauderdale was impressive. I enjoyed myself greatly, and hope you go there sometime and enjoy it as well! Unlike Miami, Fort Lauderdale is quite laid back and low key, so you can simply relax on the beach and try some delicious food, without the interference of too many rowdy young’uns.