Philadelphia has definitely been undergoing a food revolution over the past few years. While I (obviously) don’t live there to attest to this fact first-hand, it’s all I’ve been hearing about the city of late. “It’s the sixth borough,” say those who aspire to commuting to New York City from the relatively inexpensive city of brotherly love—and no respectable New Yorker would dream of moving to a place that didn’t have good food. While relocating may not be in the cards for me, an occasional visit never hurt anyone. I’m telling you—if you decide to stop at a bar, any bar, in Philadelphia, make it Village Whiskey in the Rittenhouse neighborhood.

Village Whiskey features an unmarked exterior, which emanates the speakeasy vibe that comes from within. When you walk through the double glass doors into the mini-lobby where a hostess meets you, you feel as though you’ve traveled back in time. Inside, the walls are lined with white subway tile and stately, dark brown leather booths for a clean, masculine feel. Fewer than 10 high tables dot the left side of the place with a decent bar certain to be packed with locals who enjoy the occasional (or frequent) whiskey on the right.

You see, the eponymous spirit in Village Whiskey’s name is a favorite of Chef Jose Garces—and they’ve got plenty of it. The menu comprises more than 80 whiskeys, which recalls the thorough whiskey list of Maysville. Although Village Whiskey charges a pretty penny for their drinks, they at least offer a decent pour, unlike Maysville where bartenders measure 2 oz. of liquid and serve that up as a “drink.” If you’re into whiskey, you’ll want to stop here, but don’t be surprised if you can’t get a table or a seat at the bar. 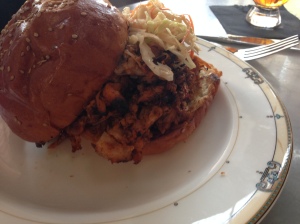 Now, what about the food? Well, it is, in a word, excellent. I ordered the 8 oz. Village burger, featuring tomato, lettuce and house made thousand island dressing on a delectable sesame bun. I opted to add the mild tasting Jasper Hill cheddar. The puck-like burger was fantastic. The meat was tender and flavorful, and it had a delicious char on the exterior. I can see why Village Whiskey claims they have one of the best in the country.

MDP got the bbq pork sammy and he was very pleased with his selection. While I felt the sandwich had an understated pork flavor, he commented that it could have had more sauce. His sandwich came with fried pickles that were quite good.

We also ordered the duck fat fries, which were good, but I expected their flavor to be a departure from fries cooked in, say, peanut oil.

Village Whiskey also has a lobster macaroni and cheese dish that I would be interested to try next time I go. And they’ve also got a good selection of drinks on tap, including Crispin apple cider, for anyone who isn’t into the whiskey menu.

I highly recommend Village Whiskey, but definitely go there during off hours (mid-afternoon on a weekend, possibly weeknights) to ensure you grab a table. One last thing worth mentioning is that Village Whiskey has an outpost in Atlantic City, for all you Jersey folks who don’t want to make the trek to Philadelphia (though you should).