I must preface this post with an admission: I resisted going to Murphy’s Lobster & Grill for many months. In fact, when visiting with some friends, MDP declared he’d like to try it, for their oysters and other seafood fare, and my friend said he would go with him. Well, the friends moved away and MDP was left with no one to accompany him to Murphy’s. I finally gave in. 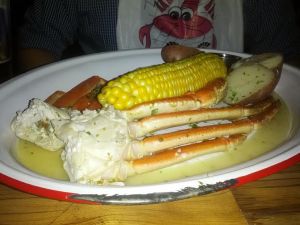 And I’m glad I did! Situated on a quiet corner on Skillman Avenue (about 10 steps away from where I once lived) in Sunnyside, Murphy’s used to just be a bar, but, in recent years, they renovated the space adjacent to the beloved bar and turned it into a lobster house. And what a lobster house it is: the walls are covered with nautical-inspired decorations, such as giant fish and torn and tattered photos from yore. The ambiance is warm and quiet, and the lighting is just right.

The menu is filled with seafood delectables, including baked clams, calamari and items from the raw bar for appetizers. We opted for the steamed mussels, which are cooked in a delicious white wine sauce. They were served with two pieces of garlic bread drenched in butter. I saved my bread for when we got to the bottom of the bucket–it was perfect for soaking up the fantastic broth. The mussels were on the large side, with giant meaty bits within. They were quite good.

For entrees, Murphy’s offers a range of seafood dishes, with a lobster platter prominently placed at the top of the menu. They also serve surf and turf, and a steak frites dish that I nearly ordered. Instead, I got the lobster macaroni and cheese that was wonderful. Succulent bits of lobster that were sauteed in garlic dotted the creamy macaroni and cheese. Finely shredded cheddar coated the top of the macaroni, adding a layer of deliciousness to the very rich dish.

Prior to traveling to Murphy’s, we watched a few videos on how to eat crab legs, something neither of us had ever done. So, MDP accordingly ordered the snow crab platter, which came with two crabs’ worth of legs (eight in total), boiled potatoes and corn. Over the course of about 30 minutes, I watched him patiently crack each leg, at every joint, pulling out bite-size pieces of meat and drowning them in the melted butter that came in a tiny cup. I tried a bit of crab meat, and it was quite good, but I honestly prefer lobster. (Shoot me for having a refined palate.) Everything on his plate was fabulous, with the exception of the corn that seemed to be somewhat firm–I owe this to corn no longer being in season.

Per the recommendation of the jolly waiter, we ordered the chocolate mousse cake for dessert. It was delightful. The mousse was smooth and creamy, and the chocolate cookie crust was firm and flavorful.

Murphy’s is one of the few seafood restaurants in the neighborhood, and it deserves the kind of acclaim some of the Queens Boulevard places have received. I hope it continues to attract a good crowd.