“Which neighborhood do you want to have dinner in?” asked my restaurant-savvy coworker as I pondered aloud about my Friday night plans.

I rattled off a few areas that might be convenient, considering MDP works in SoHo.

“What about The Odeon in TriBeCa?” she asked.

Together, we looked at the restaurant’s website and she continued to tell me all about the food and ambiance.

“Everything is good,” she explained. “And it’s got an old-time diner aesthetic. It’s a place where you can see beautiful people and feel very cool.”

It sounded like my kind of restaurant, so MDP and I decided to try it.

When we arrived, the hostess informed us that there were several tables for “walk-ins” near the front. We mistakenly selected a table next to a pillar in the middle of the restaurant. Pro tip: Make a reservation at The Odeon if you’re interested in trying it, so that you can sit somewhere that’s not in the very center of a highly trafficked pathway.

After getting comfortable, we were greeted by a waiter who would prove to be extremely attentive and helpful over the course of the evening. He asked us for our drink orders, which were promptly delivered shortly thereafter, and what type of water we would like for the table. A few moments later, he brought us the tap water we had requested and asked if we would like some bread, which quickly came out of the kitchen.

The menu isn’t particularly large, but everything looks delicious. We ordered the baby beet salad as an appetizer to share. Before the salad was served, MDP inadvertently knocked the butter off the table. A staff member swooped in, picked up the butter and instantly brought us a replacement. In short, the service is impeccable at this restaurant. 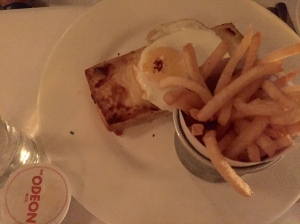 A table runner placed the baby beet salad—organized in a perfectly round circle on the plate—on the table and we dug in. It featured a bit of feta, fennel and arugula, but the best part about it was the blood orange vinaigrette that offered a citrusy essence to the salad. MDP and I were very pleased.

For entrees, we ordered off the “brasserie” section of the menu: MDP got the croque madame (it is a “croque monsieur” on the menu, but he requested the egg on top, which made it a true croque madame), while I opted for the moules frites. A slender looking sandwich, MDP’s dish was a delectable combination of prosciutto, ham, gruyere and Mornay sauce with a distinct kick to it. I greatly enjoyed his croque madame, which also came with a hearty portion of matchstick french fries that were superb. Now, I implore you to order the mussels when you go to The Odeon—even if you’re unsure about whether you like mussels—because they are easily the best mussels I’ve ever had in my life. Drenched in a beautiful saffron cream broth, they were covered with sautéed leeks and tomatoes, and were incredibly flavorful. I kept telling MDP, “These are the best mussels I’ve ever had. Even better than Belgian Beer Café.” I love leeks and don’t see them used enough when I dine out. I was delighted that The Odeon embraces the leek and puts it front and center in the moules frites—a fantastic decision. Obviously, my mussels were accompanied by fries, which I gladly inhaled.

My coworker had noted that the desserts were top notch at The Odeon. She highlighted the profiteroles, which I always love, but we decided to go for The Odeon sundae. With some of the best vanilla ice cream I’ve ever had, the sundae had a dollop of housemade whipped cream on top and a small container of hot fudge on the side. MDP drizzled the not-too-sweet hot fudge all over the ice cream and whipped cream, and I even used my spoon to scoop out the lining of fudge on the bottom of the container, allowing us to savor every last bite of it.

The Odeon is fantastic and served up some of the best fare I’ve had in recent months. Do go there.

Take the 1/2/3 to Chambers Street and walk north on West Broadway to Thomas.