Sunnyside’s Queens Boulevard is definitely for the up-and-coming. Pink Icing bakery is going strong. Salt and Fat has made a huge splash on the New York food scene. And now we have Venturo Osteria and Wine Bar, whose pedigree promises great things. The question is, does it live up to its promise? 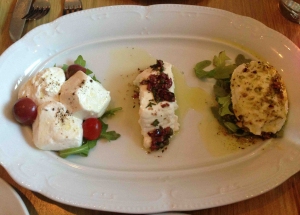 Located in a newly renovated space, Venturo takes the place of an old French restaurant called Tapenade, which was never right for the neighborhood. The service wasn’t with it and the food was just so-so, at a higher price point than anyone likely wanted to pay. So, when I read about an Italian restaurant owned by a seasoned restaurateur replacing Tapenade, I was excited—thrilled, even.

We went to Venturo with high hopes, and the place mostly lived up to them, but I have a few issues with the food (and service).

To start, we opted for the three-cheese plate with mozzarella, primo sale and ricotta. Legend is that Venturo makes its own cheese, bread and pasta—all of which are very good, I assure you, though the bread that was served to us was over salted. You can order these cheeses separately, of course, but we wanted the full Venturo experience so we ordered the flight. The mozzarella came with a sun gold tomato salad; the primo sale was covered in a salty, delicious olive tapenade; and the ricotta featured drizzled pistachio oil on top. Of the three, the clear winner was the primo sale, which was soft, dense and creamy and unlike any cheese I’ve ever had before. The mozzarella was very good, too, but not as flavorful as Palma’s, and the ricotta was looser than what I’m accustomed to. If you’re going to try one, get the primo sale. 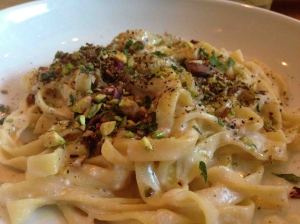 The menu is limited at Venturo, and there was some speculation by MDP that they possibly rotate their dishes depending upon the season or ingredient availability. I hope this is the case. They have three pastas on the menu, three entrees and two group dinners listed for people to sample.

I opted for the fettuccine, which was supposedly with pistachios, orange zest, parsley, black pepper and ricotta béchamel. The béchamel was definitely delicious, but the dish was overpowered by the inclusion of the black pepper. I ate it all—naturally—but was disappointed that the slightest hint of orange zest didn’t come through.

MDP ordered the pork shoulder milanese. Venturo takes an interesting approach to milanese. Like most places, they include a salad on top of the featured meat, but Venturo decided to put citrus fruits in the salad. MDP was delighted by this, though, if it was me, I would have been upset, as I am not fond of citrus. I tried MDP’s finely breaded pork shoulder cutlet and, while it was fairly delicious, it was clearly tough, possibly as a result of being overcooked. 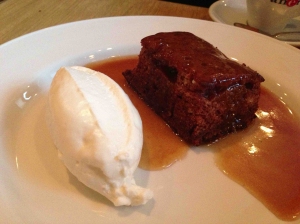 We knew we had to order dessert, so we got the baby Jesus cake, which is something I’m struggling to describe. It was unlike the king cake I’ve had in the past, which is presumably what they were angling for when they called the dish baby Jesus cake. It was dense and brown, and unappetizing to look at, but doused in a warm toffee sauce with a dollop of whipped cream. It ended up being somewhat delectable, but I’d probably order something else next time. (Venturo has about four dishes on their dessert menu.) I ordered a cappuccino and that was fantastic.

All in all, the food was pretty decent, but there’s definitely room for improvement. The service was slow and a little bit disorganized. One time, one guy would come over to our table; then, a woman would serve us. It was like, who’s my waiter?

I wouldn’t call Venturo a destination restaurant, unlike Palma. But it is definitely a good thing for the neighborhood and I wish it the very best.

Take the 7 to 46th Street and walk east a few blocks on Queens Boulevard.